-2,000 posts on the RuneScape forums, because why not?

-Complete Ritual of the Mahjarrat

So. What are your goals?

Have you noticed it? Maybe not, but I certainly have. Over the past few months the Power to the Player polls have been very sparse and far between.

Over the past months the new polls mostly consist of update feedback, while there isn’t anything wrong with that, its the fact that reaction polls are the only polls being put out. Lets take a look, the last poll which wasn’t a reaction poll was on whether or not Ironman accounts should have access to bonus weekends or not. I can’t remember the exact date which it was released but I know it was shortly after the bonus experience weekend–at the beginning of November. So its been about a month and a week since a poll which wasn’t a reaction survey has been released.

To put it in more perspective, over the last 10 polls:

7 of them were reaction surveys

and only 1 of them was a ‘dragonstone’ poll

At RuneFest 2014 Jagex stated their new addition to Power to the Players, RuneLabs, all the close details haven’t been released on it yet and it could be another few months until we hear more about it. However, RuneLabs looks to be a new section on the forums where players can post their ideas for RuneScape improvements or additions and other players can vote on these ideas. If an idea receives a large amount of votes it will be sent to the RuneScape team where they will review it before implementing it in the game. Its an interesting process and I’m excited to see how its going to work. Interestingly enough, if you trace the polls back they suddenly lost content (and more surveys were released) right around the time of RuneFest (when they released new information about RuneLabs). It seems like Jagex has wrapped up the Power to the Players for 2014, however, there’s something much bigger coming in 2015. So though the polls may seem to be a bit useless lately Jagex is far from ditching the idea of a more player driven game.

Players can find the Crwys clan just east of the Tower of Voices. 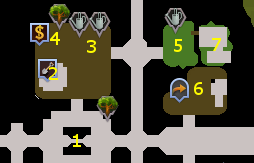 Four: Two Yew trees and a bank as well as Memoriam Crystal 08.

When the Voice of Seren is active in the Crwy clan players will receive the following buffs, as well as the city wide buffs.

Adding Elf City to your daily farm runs is highly profitable, as your crops have the chance of skipping growth stages. Players also have access to another Elder tree farming patch and a regular tree patch in the Trahaearn clan. To receive the of the Crwys title players are required to grow an Elder tree and successfully check its health.

In terms of Woodcutting, some of the best in the game can be found all within Elf City. Only a few clicks away players can find an almost never ending supply of Yew, Ivy, and Magic trees to chop. However, what really makes the deal is the bank chest right next to the woodcutting resources.

In addition to Woodcutting and Farming, players can unlock another Spirit Tree by talking to Glouron with 89 Farming (not boostable). Also Crwys contains 2 Memoriam Crystsals. Finally with 97 Thieving, players can pickpocket Crwys workers for seeds, Supercompost, Brawling Gloves (Firemaking/Woodcutting), as well as other universal loot from Elf workers.

The Trahaearn clan in Elf City can be found immediately to the east upon entering the gates of the city.

Five: Four anvils and one forge

While the focus of Trahaearn is on high level mining, a few options exist for those in the lower levels. Coal mining is very efficient as the bank is closer than the deposit box at Living Rock Caverns and there are enough coal deposits to keep you constantly mining. Even if the player cannot access the Seren Stones they still have a chance of receiving Corrupt Ore while mining the other ores in the clan but only while the Voice of Seren is active. Another great mining option are the gem rocks. Anyone who has access to the city will have the ability to mine the gem rocks. Gem rocks can be very rewarding in more than just one way. Firstly, they provide an easy money source as players have the rare chance of mining an uncut Onyx. In addition, the rocks provide many Spirit Gems which are equipped in the pocket slot to save charms during Summoning training.

At exactly an hour of mining (with no Voice of Seren) this was my gatherings, note that my profit would have been tripled if I had received an Onyx.

In addition I received: 6 Spirit Emeralds, 14 Spirit Rubies, 17 Spirit Sapphires, 5 Spirit Diamonds, and 8 Spirit Dragonstones. I was filling my inventory around every 7 and a half minutes.

All in all, gem rocks aren’t very profitable if you don’t get lucky with an Onyx. However, they have the ability to save you countless charms while summoning.

By far the biggest draw to the Trahaearn clan is the Seren Stones. Comparable to ivy for miners or Living Rock Caverns, these rocks offer effortless mining and are currently the best in the game for exp rates. While mining Seren Stones, players will receive Corrupt Ore, a stackable resource which can be ‘destroyed’ at a forge for smithing exp. Constantly receiving Corrupt Ore is not a guarantee, instead players will receive it around every two or three successful mines.

Upon mining 100 Corrupt Ore players will receive ‘of the Trahaearn’ tite.

With full boost and double exp players can reach upwards of 400k Mining exp an hour! Making it by far the fastest method of training in the game.

Exactly 1,500 Corrupt Ore can be smithed per hour, granting a player 225k Smithing exp an hour or 270k Smithing exp if the Voice of Seren is active. This is a great option for Smithing if a player cannot afford other methods, however gathering the ore is slow but provides quality Smithing rates per hour.

After a player has destroyed 100 Corrupt Ore they can speak to Lady Trahaearn located at the Seren Stones to receive a Smithing lamp worth 50k exp.

We’ve put together a detailed guides to the city to show you the best skilling spots, hidden content, as well efficiency training. Since this is a massive city its naturally a huge guide which covers everything you need to know, thus its been split into the different clans of the city. Below you’ll find links to each clan held in the city for further detail about them.

Still trying to get into the city? We got a guide for that too.

Well I finally changed my name. With the latest name release (I-M) I figured I’d give it a shot and see if I could grab anything that I wanted. So I showed up on Wednesday mid morning with my list of 10 names I was going to attempt for, however, per usual the whole system locked up about 5 minutes before the release. The ingame name change button wasn’t opening and the website name change feature was always crashing. Ten minutes in all the names I wanted were gone except one and surprisingly it seemed as the name went unnoticed. So for 45 minutes I hit refresh repeatedly trying to get my name through the website, but it never worked and nearly an hour later my last name on my list was taken. Disappointed that even after 45 minutes I couldn’t get the name I gave up and logged off.

But curiosity got the best of me and about 30 minutes later I came back and decided to try and find another name I wanted. So I was going through three letter words to see if any were open and stumbled upon ‘Kit’. At the same time I saw on the forums that people were having trouble with Chrome and suggested using a different browser. So I changed browsers and after the third attempt I landed the name.

In the end I’m happy with the new name. Its simplistic, has meaning, and is something new.

Today marks the release of Legacy, but alongside that comes some global changes to combat and the game in general. Here’s a full list with a brief description.

The most noticeable of changes, this is a combat formula build around the pre-EoC combat formula and balancing Ranged and Magic’s contribution. Here’s the formula itself:

Making a return since EoC’s release, these powerful attacks are only available from wielding a specific weapon and using the special attack, costing a specific amount of adrenaline (EoC) or special energy (Legacy). With their implementation comes the removal of weapon passives like godswords, but the specials will more than make up for the removed passives, so don’t panic sell that Saradomin godsword just yet!

Instead of armor providing the majority of LP bonuses and Constitution providing 40 LP per level, your Constitution level now provides 100 LP per level and armor LP bonus is kept to a minimum. In fact, only tank armors above level 80 and Nex armor have an LP bonus. Worry not, however, as base max LP will only increase instead of decrease.

This is a Legacy-only change, where those using Legacy sees pre-EoC animations. This is visible by all in the same world, indicating who’s using Legacy and who’s not except in EoC-only worlds.

Some servers will be reclassified as EoC-only or Legacy-only worlds.

All critical-giving bonuses on jewelry and capes are replaced with flat damage boosts. Weapons with critical chance like claws and Korasi’s sword are not getting anything back for their loss, however. “Critical” hit splats now occur if you hit 90%-100% of your max hit in EoC or your max hit in Legacy.

These damage boosts are much more potent than before’s boosts. For example, a full set of power armor will equal aout to 12.5% of the fastest weapons’s damage of that tier, instead of previously being 10%. The armor king of DPS, Void Knight robes, are (allegedly) buffed from 5% to 7.5% extra damage, which can be further increased through power boots.

Finally, abilities that relied on criticals are either slgihtly buffed as compensation or completely lost the effect without any added buffs. For example, instead of Slice giving a 10% bonus chance of hitting a critical hit on the next hit, simply became a harder hit on its own. More information will be below as we go through the ability changes.

Abilities are also getting reworked for the update. A full list of abilities that are getting changed up is as follows:

Overall, Melee is given a direct buff, Ranged stays mostly the same, and Magic is toned down a bit.

That’s all the changes made for today’s update. Hope you all have a great time using this mode!

Did Scape Smart answer a question? Enjoyed what you read here? Feel free to follow this blog for weekly posts of the same!

Questions or Comments?
Join our FCs, PM us, or email us :)
We'd love to hear from you.

My Tweets
My Tweets
'Scape Smart
Create a free website or blog at WordPress.com.